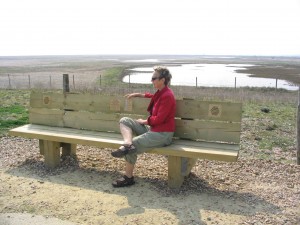 Saffron’s Soundbench at is possibly the world’s first solar energy powered, sound bench in the world!

Each month she recorded the sounds of the Nature Reserve throughout the seasons. She blended the sounds of terns, lapwings, wrens and starling calls and songs with her own music. One track is devoted to the story of the Blue Boulders and includes local voices.

It has become a popular venue for visitors to the reserve and has been featured on radio and television.

sending...
We use cookies to ensure that we give you the best experience on our website. If you continue to use this site we will assume that you are happy with it.OkNo ThanksPrivacy policy